The Macbeths throw a party & to their surprise…
Banquo’s ghost gatecrashes the soirée.

The Macbeths threw a party and invited all the most important people in the land. The party was part of their ‘cunning plan’ to have an alibi for when Banquo and Fleance were murdered. 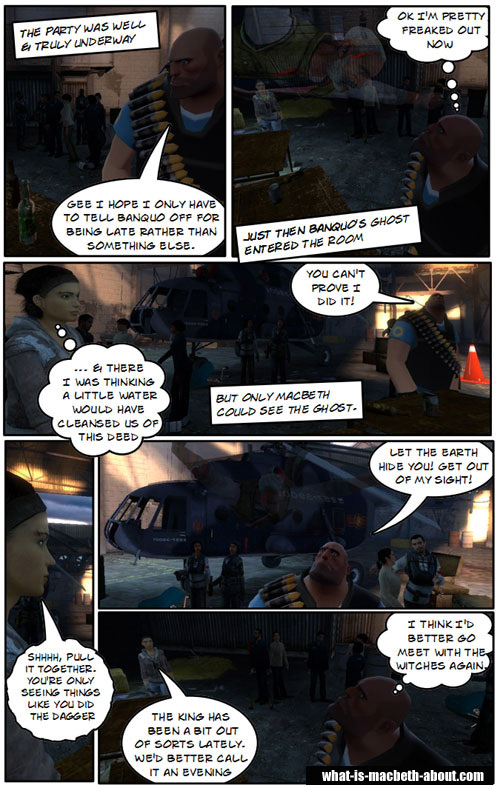 Banquo’s Ghost Appears… or did he?

Narrator: The party was well and truly underway.
Macbeth: Gee I hope I only have to tell him off for being late rather than something else.
Narrator: Just then, Banquo’s ghost entered the room.
Macbeth: Ok. I’m pretty freaked out now.
Narrator: But only Macbeth could see the ghost.
Lady Macbeth: And there I was thinking a little water would have cleansed us of this deed.
Macbeth: You can’t prove I did it.
Lady Macbeth: Shhh, pull yourself together. You’re only seeing things like you did the dagger.
Macbeth: Let the earth hide you! Get out of my sight.
Lady Macbeth: The king (now Macbeth) has been a bit out of sorts lately. We’d better call it an evening.
Macbeth: I think I better go speak to the witches again.