Macbeth walks passed the sedated guards and kills King Duncan. Lady Macbeth then returns and wipes the bloody dagger on the guards so they look guilty. Next Macbeth returns and kills the guards out of ‘revenge’ but he is really just hiding his crime. Duncan’s sons flee the country in fear of their lives when they hear of their father’s murder. 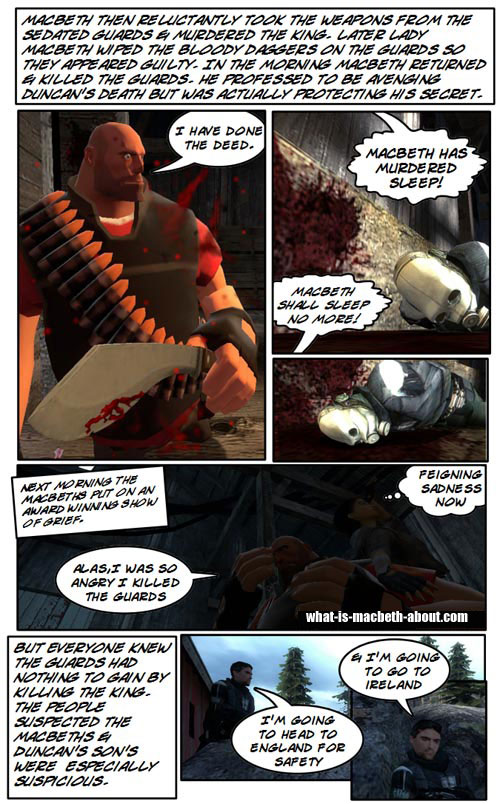 Narrator: Macbeth then reluctantly took the weapons from the sedated guards and murdered the king. Later Lady Macbeth wiped the bloody daggers on the guards’ clothes so they appeared guilty. In the morning, Macbeth returned & killed the guards. He professed to be avenging Duncan’s death but was actually protecting his secret.
Macbeth: I have done the deed.
Witch 1: Macbeth has murdered sleep!
Witch 2: Macbeth shall sleep no more!
Narrator: The next morning the Macbeths put on an award-winning show of grief.
Macbeth: Alas, I was so angry I killed the guards.
Narrator: But everyone knew the guards had nothing to gain by killing the king. Everyone suspected the Macbeths. Duncan’s sons were especially suspicious.

Why Did Macbeth Kill King Duncan?

Why Did Macbeth Kill the Guards?