Malcolm’s soldiers each cut down a branch from the Birnam forest and march with it held in front of them to hide their numbers. Macbeth still believes himself invincible so goes out to do battle. 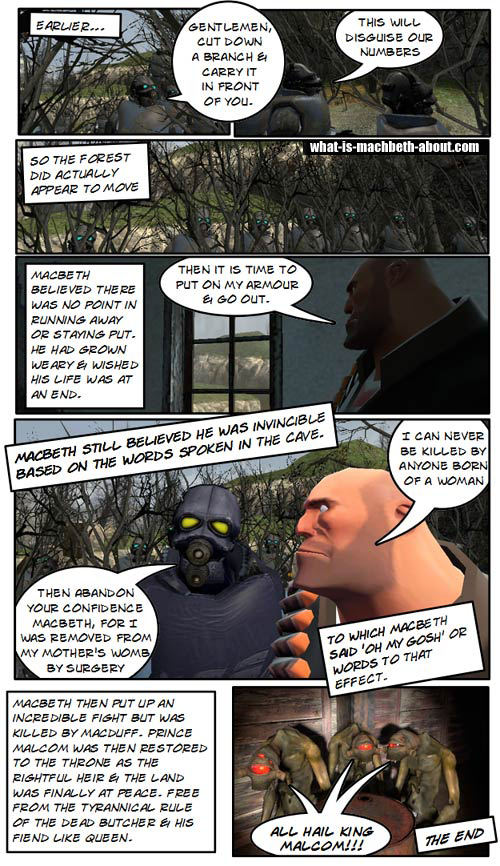 The End is in Sight

Macduff tells Macbeth he was, ‘From his mother’s womb untimely ripped’ and this is a game-changer.  Macbeth dies in his warrior armour & the throne is restored to Malcolm.

Narrator: Earlier…
Soldier: Gentlemen, cut down a branch & carry it in front of you. It will disguise our numbers.
Narrator: So the forest did actually appear to move.
Narrator: Macbeth believed there was no point in running away or staying put. He had grown weary and wish his life was at an end.
Macbeth: It is time to put on my armour and go out.
Narrator: Macbeth still believed he was invincible based on the words spoken in the cave.
Macbeth: I can never be killed by anyone born of a woman.
Macduff: Then abandon your confidence Macbeth, for I was from my mother’s womb untimely ripped (a crude C-Section #longstory).
Narrator: To which Macbeth said, ‘Oh my gosh!’… or words to that effect.
Narrator: Macbeth then put up an incredible fight but was killed by Macduff. Prince Malcolm was restored to the throne as the rightful heir & the land was finally at peace. Free from the tyrannical rule of, ‘This dead butcher and his fiend-like queen’.